Sometimes you hear the last child in a large family complaining that there is no picture of them alone without a brother or sister in it. I was actually pretty good about the photographic record, but I’ll admit we missed a few other marks with our youngest. Alekka will tell you how we neglected to teach her to how ride a bike until she was ten, or how to swim until she was 13.  Her big sister was shocked to discover a couple of years ago that the poor child had never seen a single episode of Star Trek (to be fair, not owning a TV probably had something to do with that). When we went to Portland last weekend Alekka told us it was her first time there. Also, she reminded us, she had never visited Oregon’s only national park, Crater Lake.

Better late than never, I said as we set out for Crater Lake on Friday morning. It just so happens that the Britt Festivals commissioned a new piece of music this year honoring the 100th anniversary of the National Park Service and they were premiering it at a free outdoor performance in the park this weekend. Not only did we get to make up for a significant parental oversight, we got to go to a concert.

Crater Lake is a couple of hours from our home in Medford. It’s a pretty drive along the Rogue River through miles and miles of pine forest.

In the park, we made our way to the clearing near the lodge where the performance was being set up. The performers included the Britt orchestra, a regional choir, drummers from the local Klamath tribe, and music students from Southern Oregon University. Half of Ashland and Medford was there; I must have spotted 20 people I knew among the musicians and audience.

The composer Michael Gordon took his inspiration from the natural environment of the lake:  “Natural History is designed to be an experiential, spatial work…The idea is to draw out the natural sounds in and around Crater Lake and connect the natural sonic environment to the orchestra.” The conductor encouraged the audience to walk around the clearing during the performance to hear the different voices in the piece. It was grand to experience something interesting and different on a clear warm morning in the forest. 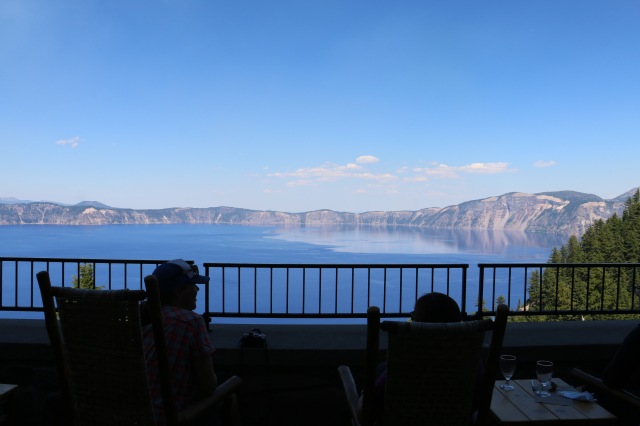 On the deck of the lodge. As you would guess from the name, Crater Lake was formed in a collapsed volcanic caldera.

Crater Lake mission accomplished (and notice, there are no siblings in the picture!):

The sky gradually yellowed as the smoke spread over the lake

Fires are common in southern Oregon in the summer. I hope this one is over quickly.

[update: As it turns out, this was the start of the Bybee Creek fire, a wildfire that destroyed 1000 acres in the park. 400 firefighters were finally able to extinguish it two weeks later]

I am a teacher from Medford, Oregon. I currently live and work in Bangkok, Thailand.
View all posts by lornaofarabia →
This entry was posted in Family, Music, USA and tagged Britt, Crater Lake, national park, Oregon. Bookmark the permalink.