Where are you, Murdo?

One of the things that keeps drawing me back to Lewis is the family connection. This is my third trip here. Each time I come armed with a little more information, but it’s never quite enough to pin down my elusive ancestor.

John Murdo (or Murdock, or Murdoch) MacIver is fairly well documented after he emigrated to America around 1850.  In 1854 he married a young Irishwoman named Sarah Dwyer in Boston. They had five children there, then in about 1862 the family sailed around the Horn to relocate in San Francisco’s South Park neighborhood (yeah, I know, haha) south of Market Street. Murdo worked as a rigger, stevedore, and later a loading foreman on the city docks.

Sarah died in 1874, leaving Murdo with eleven children aged one to 19. The older daughters found work as seamstresses, and the oldest boy left home for Chicago. A few years ago Murdo’s house was the subject of an archaeological study. (If you’re a MacIver relative interested in our SF ancestors, the study has a lot of detailed information; there is a nice bit about their family life here (search the document for “Mary McIver”).

Murdoch died in 1903 but he was still remembered by old-timers in 1927: “Murdock Mclvor, who worked as a longshoreman, was another celebrated Scotchman of his day. He was a member of all the different Scottish Societies, and was a famous Quoit Player, and participated at the various gatherings of the clubs.” (James H. Roxburgh, “Memories of the Past.” South of Market Journal. May, 1927.  p 14)

Unfortunately some key pieces of information about Murdo’s early life were lost in the Great Earthquake and Fire of 1906. The earthquake was a watershed event in my family’s story, a disaster that had repercussions and significance down the generations. For me, it has set up a brick wall in my research, because the death records of both Murdo and Sarah were destroyed, along with the marriage records of their children and (so far as I have been able to determine) Murdo’s naturalization records. I don’t know whether these records would have given me an accurate birthdate or the names of relatives in Scotland, but whatever was there is gone forever.

I did make a serendipitous online connection a few years ago with a distant cousin, a descendant of Murdo’s Chicago son. He sent me this photo, of Murdo with his second wife posing at the site of the family gravemarker they have just put up. The marker gives dates for the new wife’s brother and Murdo’s first wife, Sarah; the setting is San Francisco’s old Odd Fellows Cemetery, where Murdo also was later buried. The cemetery, the stone, and the original records were all destroyed in the 1930s, the bones reinterred at Greenlawn in Colma. I was thrilled to get this photo – and thanks to those old view cameras, you can even read the writing on the stone. But what a strange thing to take a photo of. 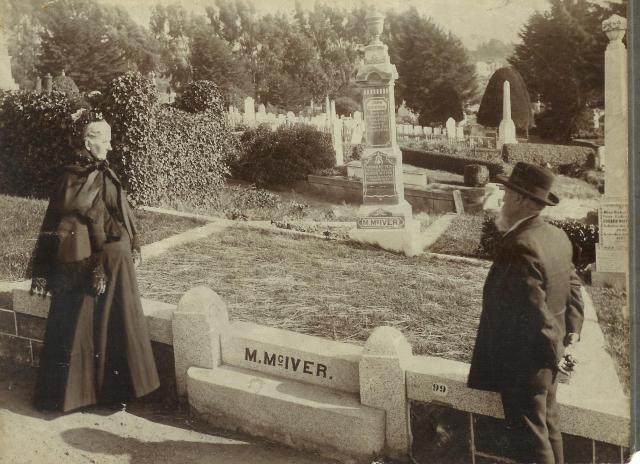 At any rate, pre-Boston Murdo has me stymied.

Although family lore had it that he was from Inverness, Murdo reported in the 1860 census that his birthplace was Stornoway, and he ought to know. Maybe he sailed from Inverness or lived there for a time before he emigrated. He named his second son (my great-grandfather) Lewis, an unusual first name in Scotland but one which (as I learned on this trip) is traditional among the MacIvers of Lewis. 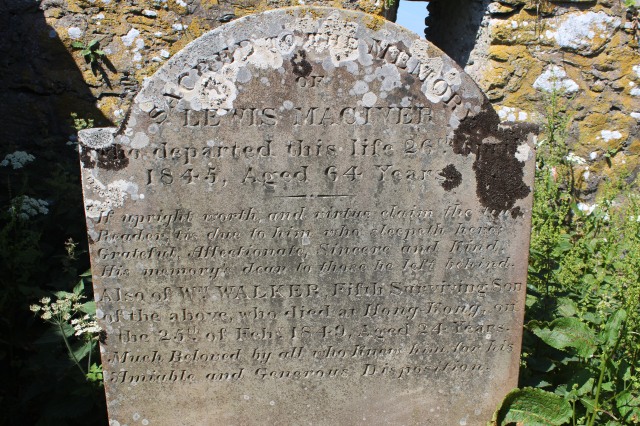 One of many dead Lewis MacIvers on the island

I am sure Stornoway or somewhere near it was my Murdo’s hometown. But the problem now is, which John Murdo MacIver was he? A name like that would be unique most places in the world, but there are at least three men born here around that time who could be my Murdo.  There were five but this week I was able to eliminate two from the running.

A VERY helpful librarian at Stornoway’s public library guided me through the various resources available there. I learned that the ownership of every croft in every village on the island has been thoroughly documented through many generations. The fellow who wrote up and published these croft histories is named Bill Lawson and he lives in Harris (the Isle of Harris, as I may have mentioned, is actually the southern end of the Isle of Lewis). He recently established a family history research center called Seallam! in Northton, where he lives. I decided to go there. But I’ll save the rest of that story for tomorrow.

I am a teacher from Medford, Oregon. I currently live and work in Bangkok, Thailand.
View all posts by lornaofarabia →
This entry was posted in Elsewhere, Family, Islands and tagged genealogy, Lewis, MacIver, San Francisco, Scotland, Stornoway, United Kingdom. Bookmark the permalink.