Three part one: when the professor talks, I listen

So here’s a funny thing that happened this week.

A little background is required:  All students in the IB Diploma Program have to write an Extended Essay. It’s a pretty rigorous thing, a sort of senior paper on steroids. Every school has slightly different deadlines, but basically the students are supposed to work on this research paper throughout their junior year and finish it up the first quarter of grade 12. When they are well into their first draft, grade 11 IB students at our school have to do something called a panel. They meet with their advisor and one or two other teachers to discuss their progress and get suggestions about what to do to improve the paper.

I was on three panels this year. The last of these took place this last Monday, during the final week of school. The student was one of our high flyers, a very bright and hard-working kid, and a deep thinker. His paper was about the number three as a motif in Kafka’s Metamorphosis.  I had helped him a little with sources early on and I was excited about the topic because of the connections with folklore studies. There is a lot to say about the number three from that perspective, and I was hoping to steer him toward some resources that seem to fit well with this particular text.

The other two faculty members on the panel are literature experts and had many useful suggestions for the student about modernism. These women are erudite and intellectual. They also (to my dismay) steered our student enthusiastically toward Jung and Joseph Campbell – mysticism and all that. Which, well, is not the direction I would have gone. I come to narrative from the standpoint of the cultural anthropologists and folklorists, and Jung does not set well with that crowd.  And at this little EE panel I felt like I did a pretty poor job of presenting an alternative perspective, mostly because I didn’t want to contradict my esteemed colleagues in front of the student. But I came away wishing it had gone differently.

That night I had a dream. I was at some kind of formal event, probably an academic conference. I was standing by a low bookshelf at the edge of the room. A man, someone connected with the conference, perhaps a professor, pointed over the shelves and said to me, “there’s someone you want to talk to over there; he’s a little out of context,” and he laughed at what he seemed to regard as his little joke. I looked where he was pointing and there was my old professor and mentor from U.C. Berkeley, Alan Dundes, sitting in a chair and looking weary. He was holding a baby boy in his lap. I wanted to call to him but it was too loud and he wouldn’t be able to hear me, but I caught his eye and waved. He gave a little smile and waved back.

The next morning, I remembered this all very clearly and was even more convinced that I had let our side, the folklorist side, down.  Alan Dundes, may he rest in peace, was a Freudian all the way and had a famous contempt for Campbell, to the extent that Jungian psychologist Ginette Paris referred to his stance as an “intellectual fatwa”: “none of Dundes’s students, if they wanted to survive academically, could admit to being interested in or delighted by reading Campbell.” (Wisdom of the Psyche: Beyond Neuroscience, 207). In my case, it wasn’t a question of not admitting interest – I fully agreed with Dundes’s assessment of Campbell.

What’s more, Dundes had written a wonderful essay about the number three. It was full of three connections that could have been useful. This dream was telling me not to let it go. The baby boy was the student. I was stuck in my library. The particular words “out of context” seemed to have some kind of importance but I wasn’t sure what.

So, back at work, when I probably should have been finalizing the library inventory, I started poking around about this student’s essay.  Something in “out of context” suggested to me to look closely at the IB requirements for the extended essay. Which I did. And I found a very serious problem. Very serious, as in, the student would have failed his extended essay if he did not change his topic. And if you fail your extended essay, you don’t get an IB diploma. The upshot was that his advisor had to call him in and tell him the bad news. On the bright side, the young man took it well and he has plenty of time to do more research and rewrite the essay. It will probably still have something to do with Jung but he’ll do a good job and earn his diploma.

So….  here’s the thing. Alan Dundes saved the baby boy’s diploma. Now I don’t really believe that Alan Dundes visited me in a dream. What I believe is that when my subconscious wants to tell me something, it knows that sending Alan Dundes to deliver the message will make me listen. Alan Dundes, that old Freudian, would approve of that interpretation. 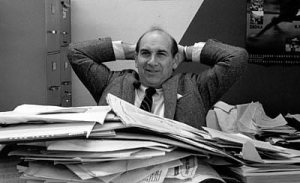 I am a teacher from Medford, Oregon. I currently live and work in Bangkok, Thailand.
View all posts by lornaofarabia →
This entry was posted in Teaching and tagged Alan Dundes, dreams, Extended Essay, folklore, IB, International Baccalaureate, threes. Bookmark the permalink.

2 Responses to Three part one: when the professor talks, I listen