Our time in Scandinavia came to an end today with a short flight to Kirkwall, Orkney. 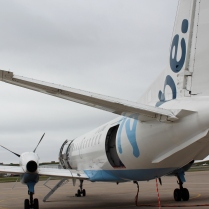 Shetland – a stop for another time

This route makes for an easy transition between regions: Orkney was ruled by Norse kings until 1468 and there are still many cultural ties. The Orcadian dialect is full of Norse words and the intonation sounds a lot like Norwegian.

Though Orkney is a part of Scotland, the people here identify as Orcadian and refer to Scotland as if it were another country. When someone here says Mainland, they don’t mean Great Britain, they mean Mainland Orkney, the largest island in the archipelago (and our present location).

I should probably mention that I have a thing for small islands. My MacIver people came from an island (Lewis, where we’ll be in about a week), and I married a guy who comes from a long line of Greek islanders.  Islands are on the itinerary for the rest of this trip so get ready for lots of ocean photos.

When we were in London at the start of this vacation, I picked up a copy of this book by Judith Schalansky:

On those long ferry rides I can plot our future holidays.

I am a teacher from Medford, Oregon. I currently live and work in Bangkok, Thailand.
View all posts by lornaofarabia →
This entry was posted in Books, Elsewhere, Islands and tagged Scotland, United Kingdom. Bookmark the permalink.