The OAP and me

With Alekka back in the states for the summer, this will be the longest time Andreas and I have ever been our own together without any of our children. We each already had kids when we met 29 years ago, and since then I think a week is the longest we’ve been away without any of them.  But in two years, which I expect to fly by in no time, we’ll be empty nesters. So this summer is good practice.

Andreas was a bit of a grouch last time we were in London. That was a couple of weeks after we had to evacuate from Damascus, which probably had something to do with it.  I think it might also have been related to the snow, the tiny bedsit, and the seven suitcases.  And also because we got here via Boston, where we had failed to get the jobs we wanted on the first pass.  At any rate my spouse’s attitude earned him the name “the Artful Codger” during our stay in the city, because he just didn’t seem to be enjoying our visit.

My occasionally grumpy spouse seems to like Britain much better this time. We saw lots of shows, the weather is good, the food is great. And yesterday we went down to Victoria coach station to buy our tickets to Dover, and guess what?  Age 60 and over get a 30% discount.

Andreas’s ticket lists his class as “SP”. Senior pensioner, maybe? But I remember earlier times when the over-60s here were called OAPs: Old Age Pensioners.  Heh heh.  If he gets grouchy again, he’s getting a new nickname. 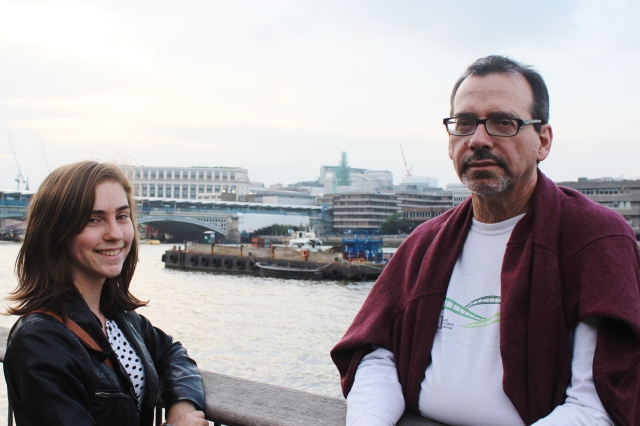 Giving London the stink-eye, with Alekka.

But I don’t think it will come to that. We’re on an adventure, just the two of us. It’s going to be a great summer.

I am a teacher from Medford, Oregon. I currently live and work in Bangkok, Thailand.
View all posts by lornaofarabia →
This entry was posted in Elsewhere, Family and tagged England, London, United Kingdom. Bookmark the permalink.