Sarajevo is a great city for film.  One of the biggest film festivals in Europe is held here in July.  Films come to the Sarajevo film festival from all over the world, and so do the film celebrities. Brad Pitt and Angelina Jolie attended last year.

This year will be the 18th annual festival. If you do the math, you’ll realize that it started in 1995, during the seige.  It is amazing to learn how the arts continued to thrive here in those desperate times.  There was film, theater, music, visual art – all while the city was being shelled on a daily basis, and with no public water or electricity.

Unfortunately we will be leaving Bosnia before the festival. But there are plenty of film events around Sarajevo throughout the year.  In the time we’ve been here, there’s been a minifestival of American westerns, and one of 1930s musicals, and numerous others we’ve seen posters for around town.  One night we went to a showing of independent Spanish language shorts at the Spanish cultural center.  I really liked this (quite creepy) one.  Hit the red cc button to get the English captioning.

Of course, there are also mainstream Hollywood movies in Sarajevo. This afternoon Alekka and I walked over to the CinemaCity multiplex to see Osvetnici – which you probably know as The Avengers.

Fun stuff. I sure hope Mr. Stark enjoyed his shawarma when it was all over. 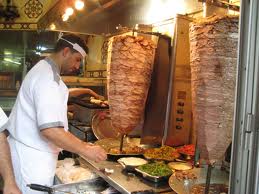 I am a teacher from Medford, Oregon. I currently live and work in Bangkok, Thailand.
View all posts by lornaofarabia →
This entry was posted in Sarajevo and tagged film, movies. Bookmark the permalink.